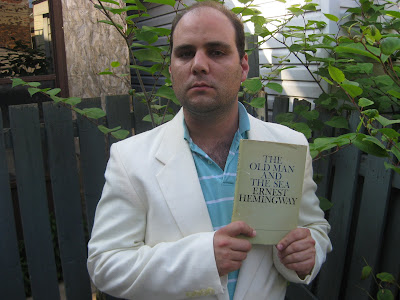 Hello, my name is Chris Locke and I am a free diver. That means that I dive deep down into the Ocean blue with no scuba gear on, not even a snorkel. I can hold my breath for about twenty seconds and then I have a little panic attack and I rush back up to the surface - breaststroking like a madman. The adrenaline rush is beyond compare.

Everyone knows that I love the Ocean. I love it so much. Sometimes when I'm near the Ocean, just floating on a dingy with some friends, I take a beer stein, scoop up some ocean water and chug it back and go, "That's really good water to drink. There's nothing wrong with it at all."
Then I offer it to others to try and they say, "No thanks. I'll get diarrhea."
But I never get diarrhea. I don't know what they're talking about. Must be my steady diet of white bread and sour cream and bacon chips. Nothing gets out of me.

I hope to someday free dive in every Ocean known to man. Even Oceans we haven't discovered yet. You know? What if there's an awesome Ocean on Jupiter? I'd totally fly through space to check out what they've got going on over there. I honestly bet you that Jupiter's got some good stuff.

One of my favourite things about free diving in the Ocean is how close I get to the Whales. They are definitely the Earth's most majestic creature. What other creature could beat it? The Elephant? No way. If an elephant stepped one foot into the ocean it would sink to the bottom right away and impale itself on one of those underwater stalagmites. What a loser. Elephants are such losers I'm not even joking right now. I swear to God, I'm not joking right now... elephants are the biggest losers. They're scared of mice.

Whale's are the best. They're so big and they just swim around going, "Oooooooh." It's beautiful. They sound just like Aretha Franklin. I love being surrounded in the deep blue by all these magnificent soul singing beasts for about twenty seconds. It's my nirvana.

If I had my druthers, and this is not hyperbole, I would live in a Whale's belly- just like Geppetto, in Pinocchio. Except I'd be more prepared than Geppetto. I'd make the Whale eat some of my stuff from my apartment first, so it would be more cozy. Stuff I need bad like; my desk organizer for pens, rulers, and scissors, my corkboard so I can put up inspirational quotes by Mark Twain and photos of redheads in bikinis, and my computer.

Unfortunately, the Whales won't eat me. It must be my diet. They know I'm junkfood. I even covered myself in plankton - nothing. Trying to open those Whales pursed lips was like trying to open an elevator door when you're stuck between floors for twenty seconds. But I'm not going to give up on my dream and I'll never stop free diving into our great Oceans. It's one of the cheapest things you can do these days since everything costs so much money. Know what I mean?

Pic of me with baby Minke: 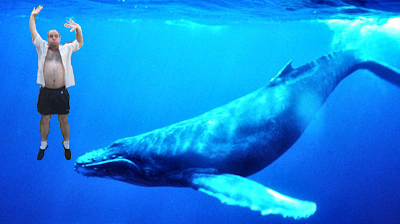